I really really liked Seattle. I just got back from a three day trip – one day for work, and two days to explore. And I always suck about blogging about my trips (where is that Hawaii blog? NYC July trip? huh!)

So, I liked Seattle – I liked that it was walkable, I liked the sky/clouds, I liked the neighborhood feel, I liked the food, I liked the fall colors. It got very grey and rainy and I was even hailed on. But, honestly, I didn’t mind. I don’t know what it would be like to live there full time, perhaps it would be tiresome, but for three days it was great. And I hope to go back, so that I can explore a whole lot more.

I also saw some excellent art at the Frye (including the above painting) and the fabulous elles:pompidou exhibit at the Seattle Art Museum. So much to say about that…. but for now a quote from the website:

Elles: Pompidou is a landmark exhibition of more than 130 works of art made by 75 women artists from 1907 to 2007. Organized by the Centre Pompidou in Paris, home to the Musée National d’Art Moderne—one of the largest collections of modern and contemporary art in Europe—this exhibition is an unforgettable visual experience that will challenge visitors’ assumptions about art of the past century. This ambitious survey of daring painting, sculpture, drawing, photography, video, and installation by innovative women artists offers a fresh perspective on a history of modern and contemporary art

There is a lot more to say about this, and the whole trip. Hopefully that will happen soon.

After months of meaning to, I finally made it to From the Sidewalk to the Catwalk: The Fashion World of Jean Paul Gaultier.

Kate and I ventured through the wilds of the Sunset on Friday night and headed to the De Young. I lost my Sunset-native card by not bringing a jacket or a sweater with me, and froze a little bit on the walk from the N at 9th & Irving to the museum. But it was wonderful to see Kate, and to actually use the museum membership!

We got in right away, which was great, and the first tableau was quite impressive – a row of a dozen or so mannequins clothed in Gaultier’s impressive work against a vibrant blue background. And the shocker – the mannequin’s faces moved! Through projection, they spoke or sang or merely blinked their eyes. This created a disturbing and beautiful opening look at the collection.  According to the exhibit’s website, “Gaultier partnered with the Montreal-based theater company Ubu Compagnie de Création in the design of 30 animated mannequins who talk and sing in playful and poetic vignettes.” 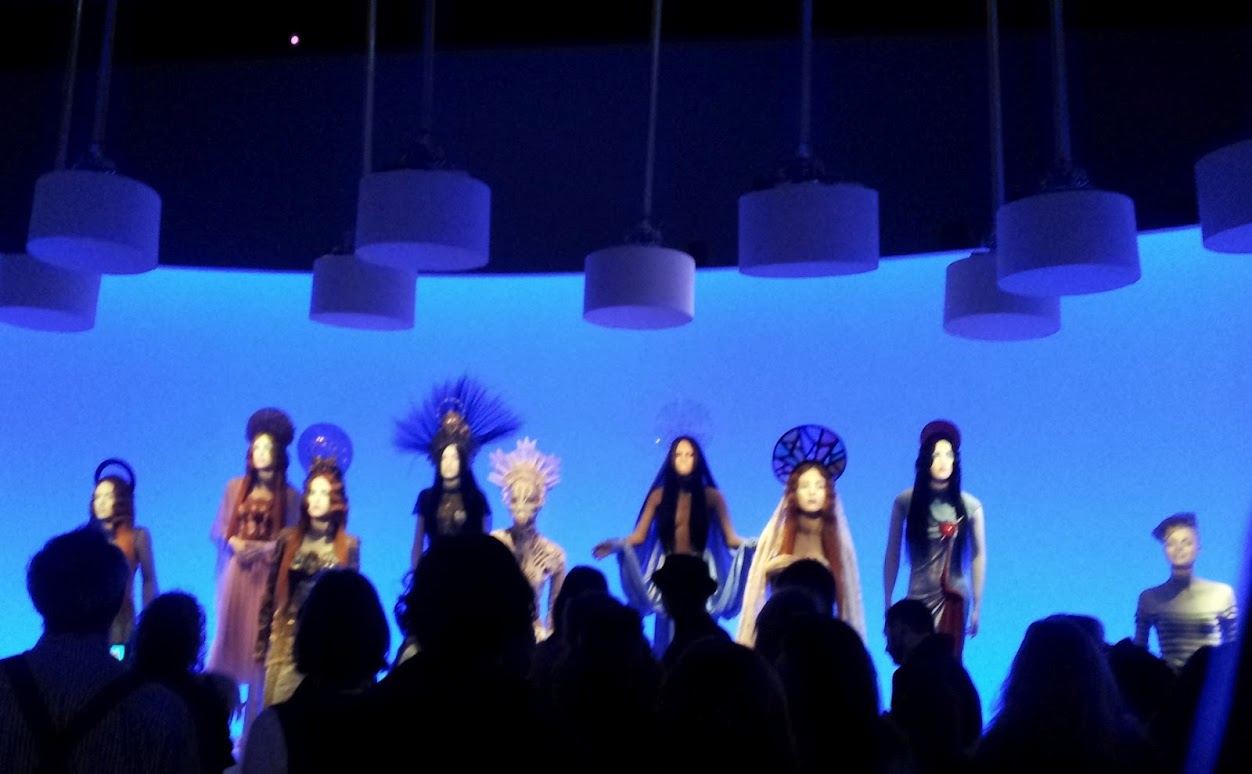 It was wonderful to go to a special museum exhibition that was not afraid of cameras! I took some shots of my favorite things on my phone, but didn’t know ahead of time, so I didn’t have my DSLR.  I think that if the taking of pictures won’t damage the work, then it is something that should be allowed – it helps me to remember the exhibit better and show to others that they should go.Good job De Young!

There was a ton to see, and it was decently crowded, but not too overwhelming. (of course, I compare this to the sea of bodies at the Savage Beauty/Alexander McQueen exhibit at the Met a couple of year’s back). There was a nice juxtaposition between the actual pieces, runway videos, and wonderful photographs of the work. 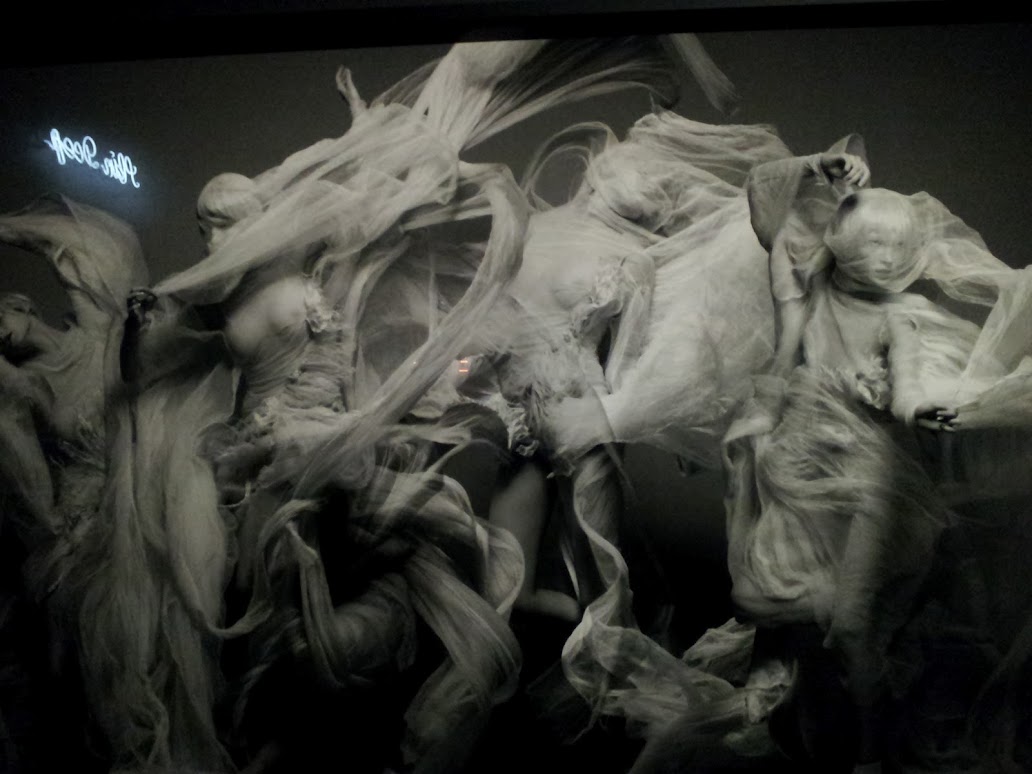 “Invitation to the the Dance” with Elena Sudakova.
Photo by Solve Sundsbo Gown by Jean Paul Gaultier, Pirates collection (2008)

Although I loved getting to see the detail on the pieces – all super impressive – I often found the photographs of people in Gaultier clothes much more interesting than the pieces themselves. As Kate said, clothes feel dead without a body inside them, and the photos are capturing that life. (I think that is also why the first room with the projected mannequins worked so well – it brought back some of that life). 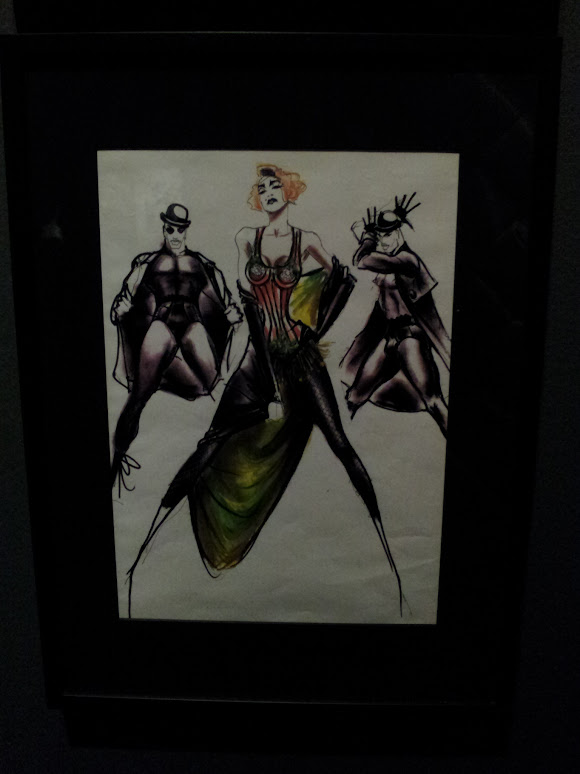 In addition to the sketches, they had lots of interesting pieces from their work together.

I liked this commentary on feminism and the corsets that Gaultier uses:

Unlike the eighteenth-century court corsets revived by his contemporary Vivienne Westwood, Gaultier’s corsets were born of the pin-up girls and movie queens of the 1950s. Gaultier’s women, though corseted, did not negate the feminist struggles of the 1960s and 1970s; rather they expressed a new female emancipation.  The liberation of this era and paradoxically established a new tyranny of beauty, one that imposed a new ideal of women – ultra thin, even desexualized. Pushing for a another redefinition of femininity, Gaultier excavated twentieth-century corsets and 1940s and 1950s waist-cinches out of his grandmother’s closet to create “underwear as outerwear” that celebrated a voluptuous feminine body, culminating in his modern classic, the cone bra.

Here is one of my favorite pieces from his more modern work: 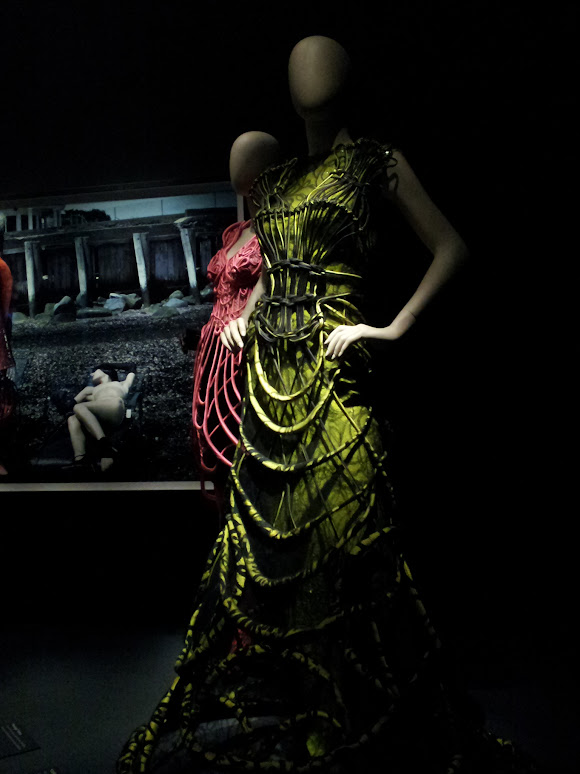 It is a great exhibition and runs for another two weeks. I recommend checking it out!

We finished our Friday with a lovely dinner at Nopalito. I highly recommend their Tamal de Queso Estilo Corunda. Super delicious!

Time for a quick update on my NYC Bucket List.
I have 9 days left in New York and a ton to do.

In addition to the list below, I have been trying to spend a ton of time with friends. Which has been wonderful – lots of lunches, movies, Trivial Pursuit, Bananagrams and more – but I am sadly unable to see everyone before I go, which is a hard realization.

Also, Hurricane Irene kinda eliminated a weekend in which to accomplish things – instead I just sat around and watched movies at J & J’s.

What I have accomplished since August 19th….

Sleep No More: Mask, necklace, candy and playing card after the 8/18 performance

Visit these Sites and/or take Photos:

Patience or Fortitude at the NYPL 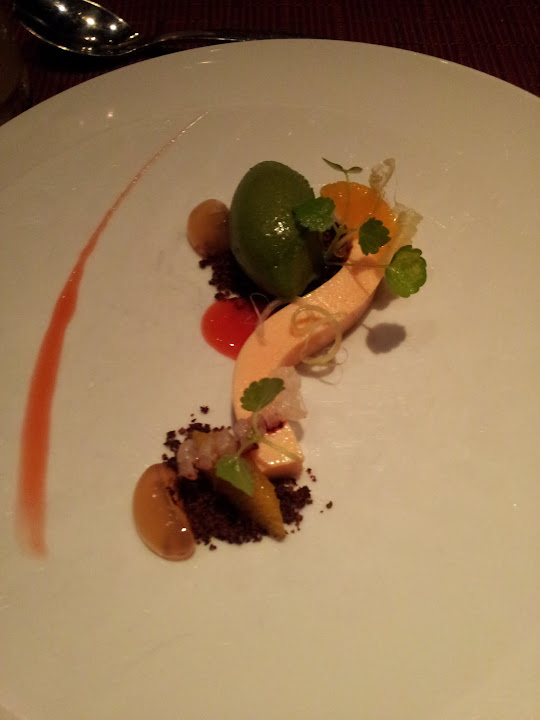 Beautiful window decal at the Cloisters

Alex admiring the Temple of Dendur

Things that I know, now, are not happening:

If you would like to see everything else I am going to try and do – and it is WAY too much –  click here.

Once upon a time there was a boy who loved a girl, and her laughter was a question he wanted to spend his whole life answering.

A minute later she asked me if I loved her. I told her it didn't mean anything, but that I didn't think so.